Gigantic stepwells, snakes, enigmatic masks and circles: the Maya culture left an impressive heritage in Yucatán, Guatemala, Belize and Chiapas. Most of the monuments were built in the classical and post-classical period from the third to the 16th century a.D. Tikal and Calakmul were powerful rivalling empires.
While Uxmal and Calakmul are monuments of the classical period, Chitchen Itza and Mayapan were built in post-classical times.

Chichen Itza is the most popular of the Mayan temples, full of tourists in the high season. It is located in the northern part of Yucatán peninsula, between Cancun and Merida.  The name means “At the mouth of the well of the Itza.” The main pyramid is the Castillo temple. In former times you could climb it to the top.  Now, this is not allowed any more.

Calakmul was one of the largest Maya towns and one of the most powerful. In the 6th century it was the greatest opponent to Tikal. From the 10th century It fell into oblivion for many years and was rediscovered 1931. Many of the temples are overgrown by trees. In many places the forest overtook the architecture. Historically it is more important than Chichen Itza but it draws not as many tourists, may be due to the long way there.

Calakmul is not easy to reach. There is a marked sideway from the MEX 186. From there it is about 60 km to the place. During the season you park your car and get there by a bus. Off season you can drive the bumpy way to the place yourself, be careful with that, the way has many dangerous holes. If you are there be sure not to lose the orientation. The area is very large and there are basically three ways, large, middle, long, through the site. The long way takes many hours, so plan your trip carefully. Consider to take a guide. The description at the sights is not too clear. 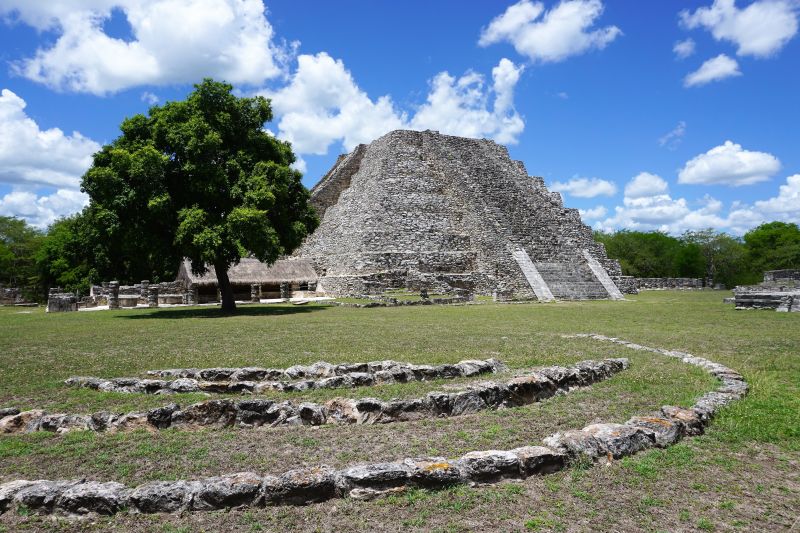 Mayapán os one of the youngest Maya towns. It was founded around 1000 by the legendary Emperror Quetzalcóatl. Mayapán came to its peak of power in the 12th century when it ruled almost the entire Yucatan peninsula. Mayapán now is a quiet place. Not many tourists visiting the site. But there is a  unique atmosphere about it. It is a hidden gem among the Maya sites.

The historic site of Uxmal probably offers the widest variety of buildings. The dominating building is the “Pyramid of the Magician”. It is built in an unusual rounded shape that is not found anywhere else in Maya architecture. Uxmal was a powerful urban centre between 7th and 10th century. After this it was abandoned for reasons unknown. Impressive is also the palace of the governor (Palaciao del Gobernador) and the great pyramid. There is also a site for ball playing. Most probably the ball should land in opposite vertical hoops that can roughly be compared to goals in soccer. But there was a difference in the result. While if you are a famous soccer player you can still earn money if you lose the game, these players are said to lose their head in this situation. –  Be sure to reserve 3 – 4 hours at least to be able to see the whole area.